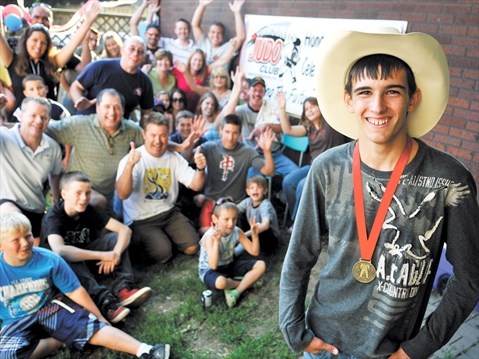 OSHAWA — Matt Ausman,16, received a surprise homecoming from his family and friends July 10, after winning a national championship in judo in Calgary. This came one year after he broke his hip in competition. July 10, 2009 – Sabrina Byrnes / Metroland

OSHAWA — It’s been quite a comeback for Matt Ausman.

The 16-year-old Oshawa resident and budding judo star, rose to the occasion on the big stage recently, capturing a gold medal at the Canadian National Judo Championships in Calgary, defeating nemesis Tyler Kamino in the final.

“He threw me once but didn’t get the full point,” said Ausman, replaying details of the fight. “I got lucky. He went to throw me again and I got the block and then rolled him over, put him in a choke (hold) and choked him out for first.”

But it wasn’t long ago that Ausman’s mindset was focused elsewhere, ironically thanks to a throw that Kamino did execute.

In a mini tournament prior to the 2008 nationals, Ausman suffered a broken hip, which resulted in subsequent surgery and weeks of rehab.

“I didn’t know that I had a cyst on my (hip) bone and I was fighting Tyler. We both went in for the same throw. He had more power and when I hit the ground I heard ‘pop, pop’,” Ausman recalls. “Then I couldn’t get up. I (knew) something was wrong. I thought I popped my hip out, so I waited five or 10 ten minutes and then I tried standing up. When I stood up I took three steps, but every time I took a step I heard the ‘pop, pop’. I fell and then the medic wouldn’t let me get up. He told me I wasn’t going anywhere.”

Next up a trip to the hospital, where, following x-rays, Ausman was told surgery would follow.

Ever since, the goal for the Monsignor John Pereyma student has been to get back into top competing shape, and that mission has clearly been accomplished.

But, getting back wasn’t as easy as simply stepping onto the mat again. Ausman couldn’t do much following surgery, and it wasn’t until six weeks post-operation that he was able to begin light training, which he did helping out his father Kevin, who teaches younger judo athletes.

As his hip would allow it, Ausman increased his training, but still struggled mentally, for fear of sustaining another injury, he admits.

“A lot,” he said when asked if nerves were a factor in getting back to action. “It was a hurdle, but you have to try and get over the obstacle, right? I slowly got over the fact that I was healed and that I could just go for it.”

With all that behind him, Ausman looks forward to a shot at winning gold during next month’s World Championships in Budapest, Hungary.

“I feel amazing. It feels good to have this under my belt, but Worlds, I want to take that under my belt too,” he said.