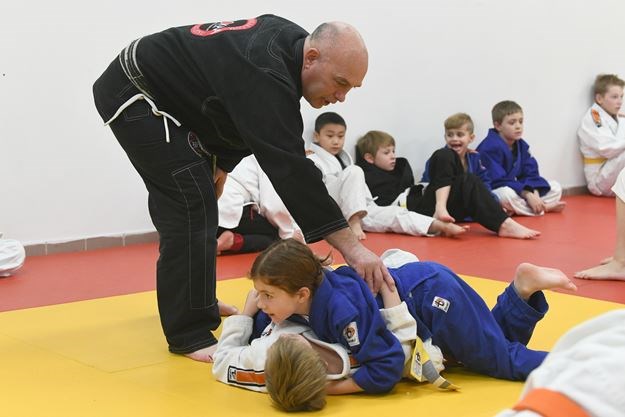 WHITBY — Kevin Ausman sure isn’t one to let obstacles get in his way or moss grow under his feet.

Faced with the challenge of losing his martial arts dojo when the building they were renting space from abruptly closed down last April, Ausman searched high and low for a new place to train, but found rental costs too exorbitant to pull it off right away.

While he continued to look, he delved deeper into a newer passion, scuba diving, which he is now also certified to teach.

Ausman is offering both through his new Judokaa Martial Arts studio, which had an official reopening ceremony Jan. 17 at 165 Garrard Rd. in Whitby.

“You’ve got to take adversity and try to make it a good thing,” explained Ausman, a 56-year-old Oshawa resident and owner of Oshawa Security Systems. “I guess that was the silver lining in the fact the club got shut down like that.”

This isn’t the first time Ausman has had to start pretty much from scratch in teaching martial arts.

He had previously worked at the Formokan Judo Club for 10 years, but looked to open a new club after the kids’ program he had been running there was given to another instructor.

When he finally found a reasonable space to rent, he opened his Judokaa club in 2009.

“At times it was tough,” he admitted. “Going in and you have three students and you’re thinking, ‘Oh my goodness, I hope this gets better.’ I just persevered through it and it started slow, but within two months I had probably 16 student to 20 students. It just exploded after that.”

The club had about 115 students when it was forced to shut down in April, and has restarted with about 30, enough to cover the cost of rent for now. Although many former members have moved on to other pursuits, he expects to see the clientele grow again soon.

“It’s an amazing thing to see these kids grow and learn. It’s very satisfying to see that,” he explained. “They come and go, and you always have to be positive. If you do that, they end up coming back.”

A father of three, including two who were quite successful in judo, Ausman said he took up scuba diving shortly after a divorce in 2014. He has since been to Cuba 19 times to dive, as well as the Philippines and Mexico five times each.

“It’s phenomenal, just unbelievable … I can’t describe it,” he said of the experience. “There’s no phones, there’s no internet, it’s quiet, you’re with wildlife. It’s amazing.”

Ausman is a second-degree black belt in both kodokan and freestyle judo and also has belts in jiu-jitsu and taekwondo. While he is happy to help others discover scuba, his bread and butter remains the martial arts.

“I love working with children. I’ve been doing it since 1985 and I don’t see any time stopping doing that,” he said. “I think scuba is more my passion for myself, but teaching it’s still definitely the children’s martial arts.”